The Magical Rescue of a Monarch Butterfly 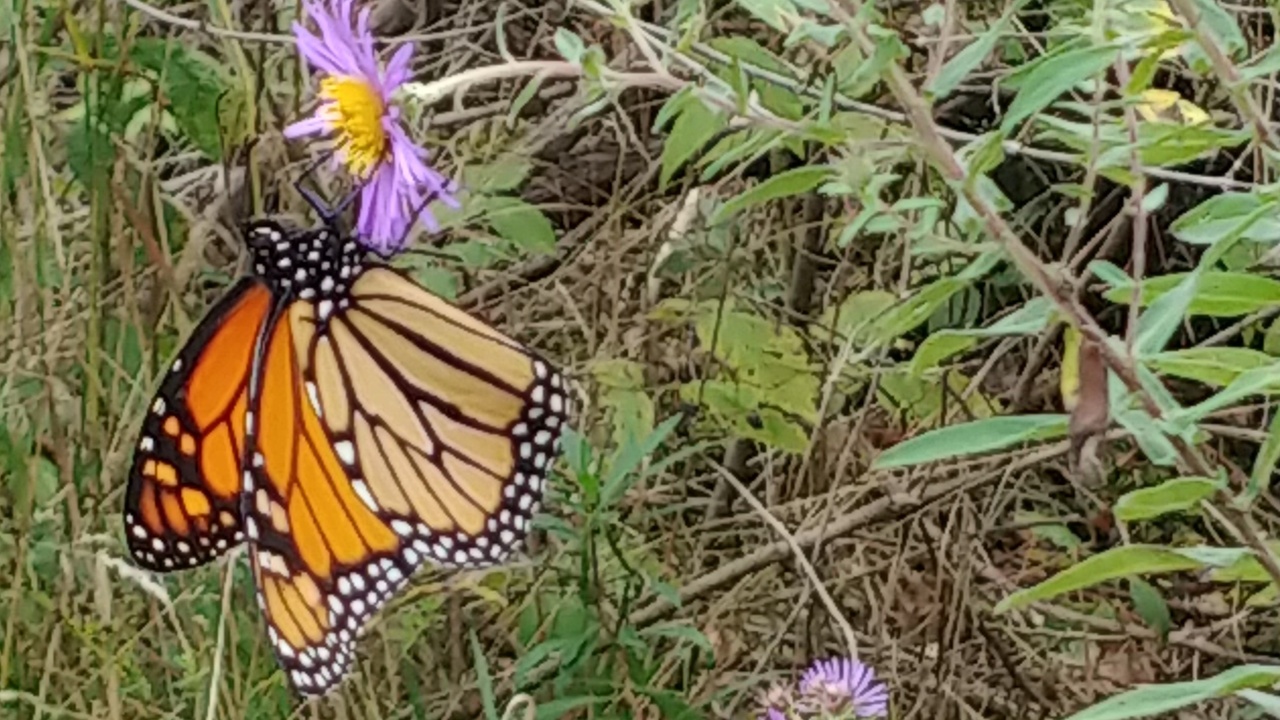 When I bought this half-acre where I live, I was reluctant to buy it. "Why is that?" you might be wondering. It was nothing to do with the land itself, but with the idea of actually owning the land. You see, I don't believe in the concept of "owning" land. How can we cut up the earth into little pieces and say, "I own this, and you don't"? This doesn't make sense to me. Land becomes a thing, and this makes it easy to do what we want with it and take what we want from it. So, when I "bought" my half-acre I made a promise to myself to be as good as I could possibly be to this land and all the insects, plants, and animals that live on it.

One of the first things I noticed on this land was all of the milkweed plants. I knew that Monarch Butterflies lay their eggs on the milkweed plant. How exciting! I decided to declare this half-acre to be a Monarch Butterfly Sanctuary. In the spirit of this, I allow the milkweed to grow where they like. If there are in my vegetable garden, I don't remove them. Here is a photo of my second garden bed this August. There are potatoes, there is corn, and there is a large milkweed, which I have staked for support. 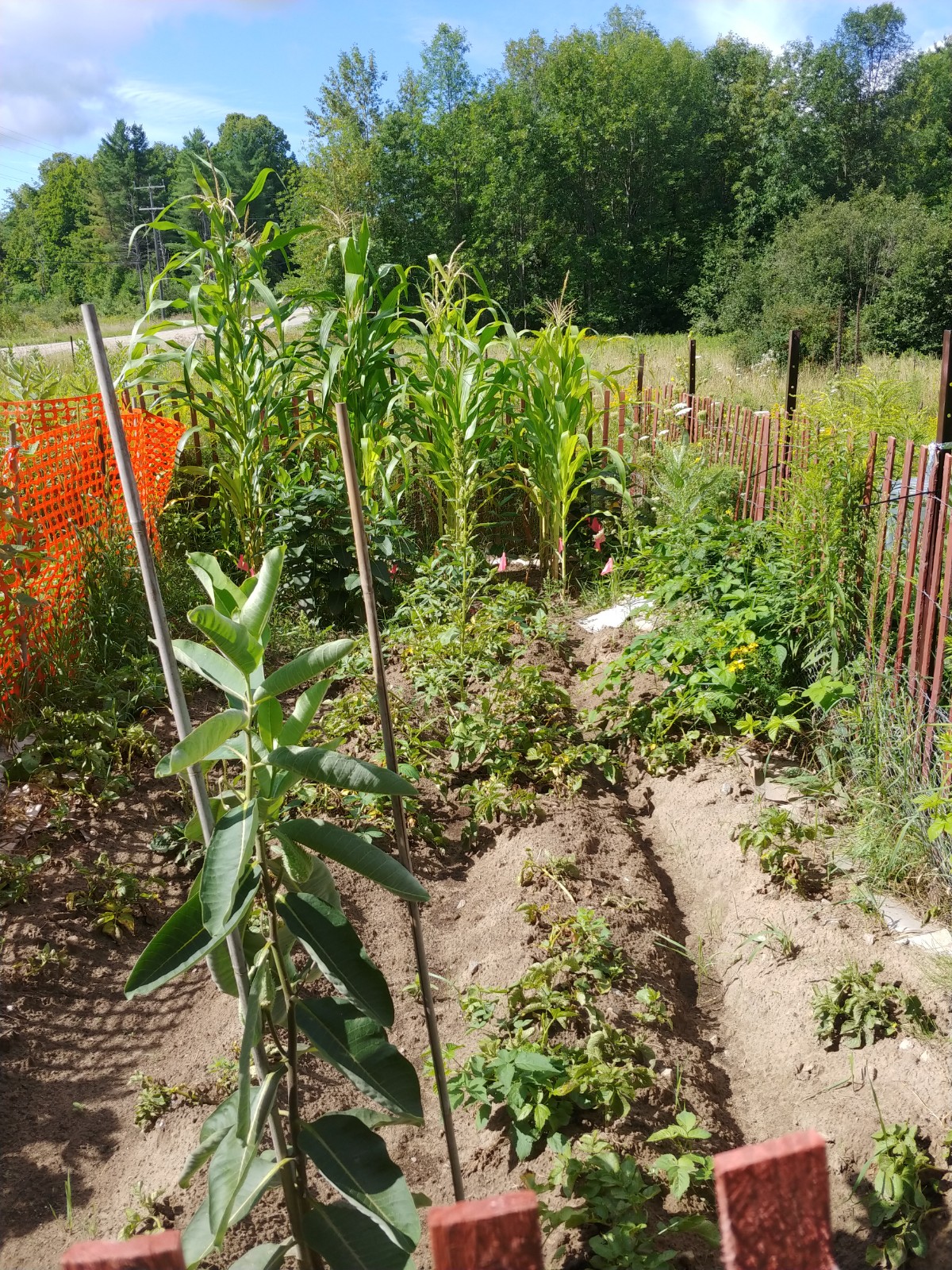 It was near the end of August this year and I was weeding in my onion patch. I made a curious discovery: I found what I thought was a piece of jewellery lying on the sandy soil. It looked like a green pendant, and I thought it had somehow gotten tangled in the onion greens as they dried up. It had gold spots on it. 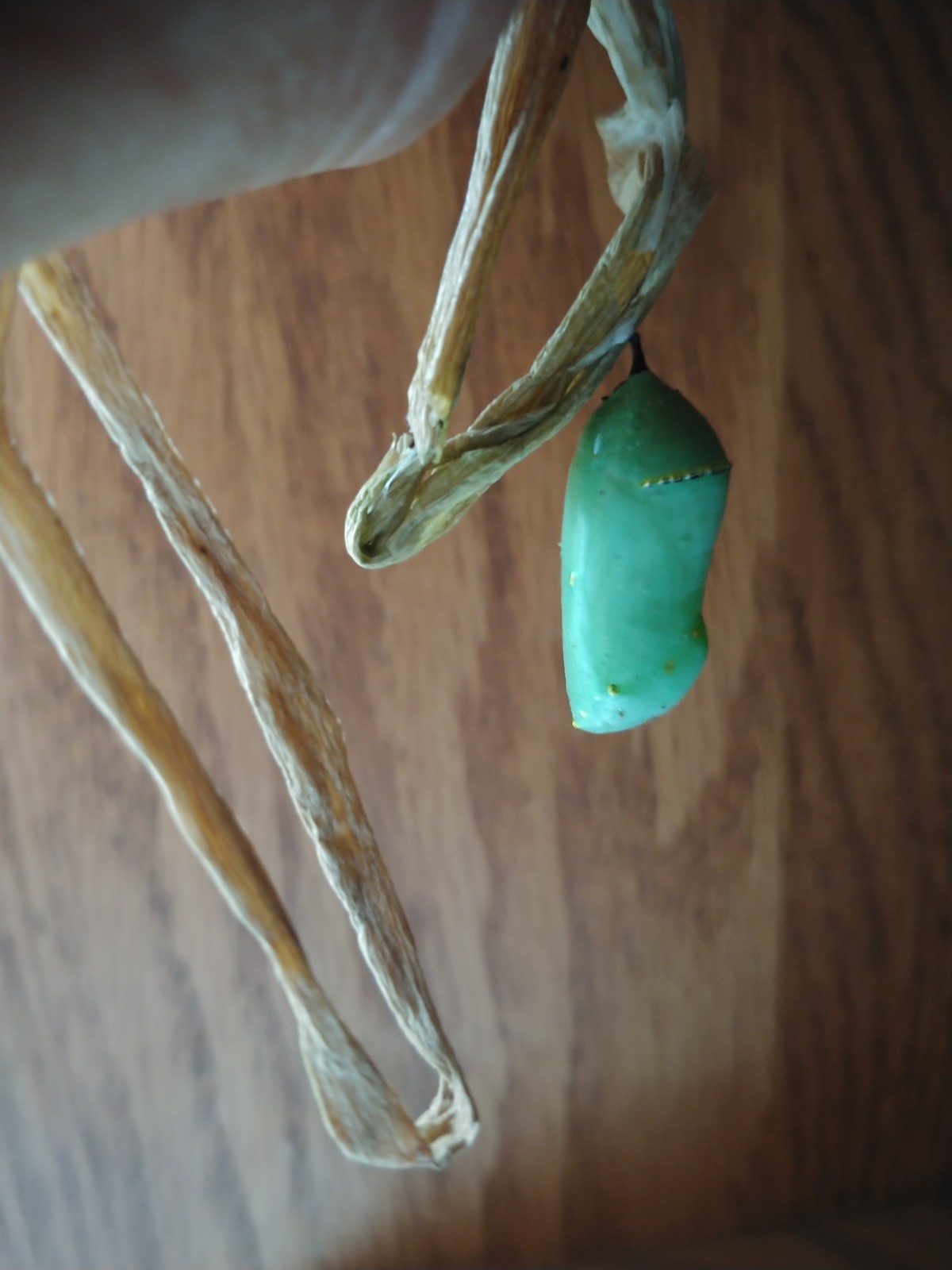 Something about the shape looked familiar. I took it inside and put "green pod gold spots images" into my search engine. Imagine my delight when I realized that I had found a Monarch Butterfly chrysalis! Some quick research on the Monarch life cycle and I realized that this chrysalis needed some help. It had clearly been attached to the onion leaves before they had dried and fallen. If the butterfly had emerged while the chrysalis was on the ground, it would not have survived, as it would not have had the space around it to unfold and properly dry its wings.

What should I do? I felt needed to do a bit more research on the best place to relocate it back outside. In the meantime, I hung it on a basket handle that was, well, handy. A bit of dental floss worked well to tie it. You can see the gold spots quite nicely in this photo. What is their purpose? They help the developing butterfly to breathe.The spots are gold due to carotenoids that the Monarch caterpillar got from eating the milkweed plant. That is part of the explanation for where the chemicals came from, but it doesn't explain the magic of how the caterpillar knew to put them there. 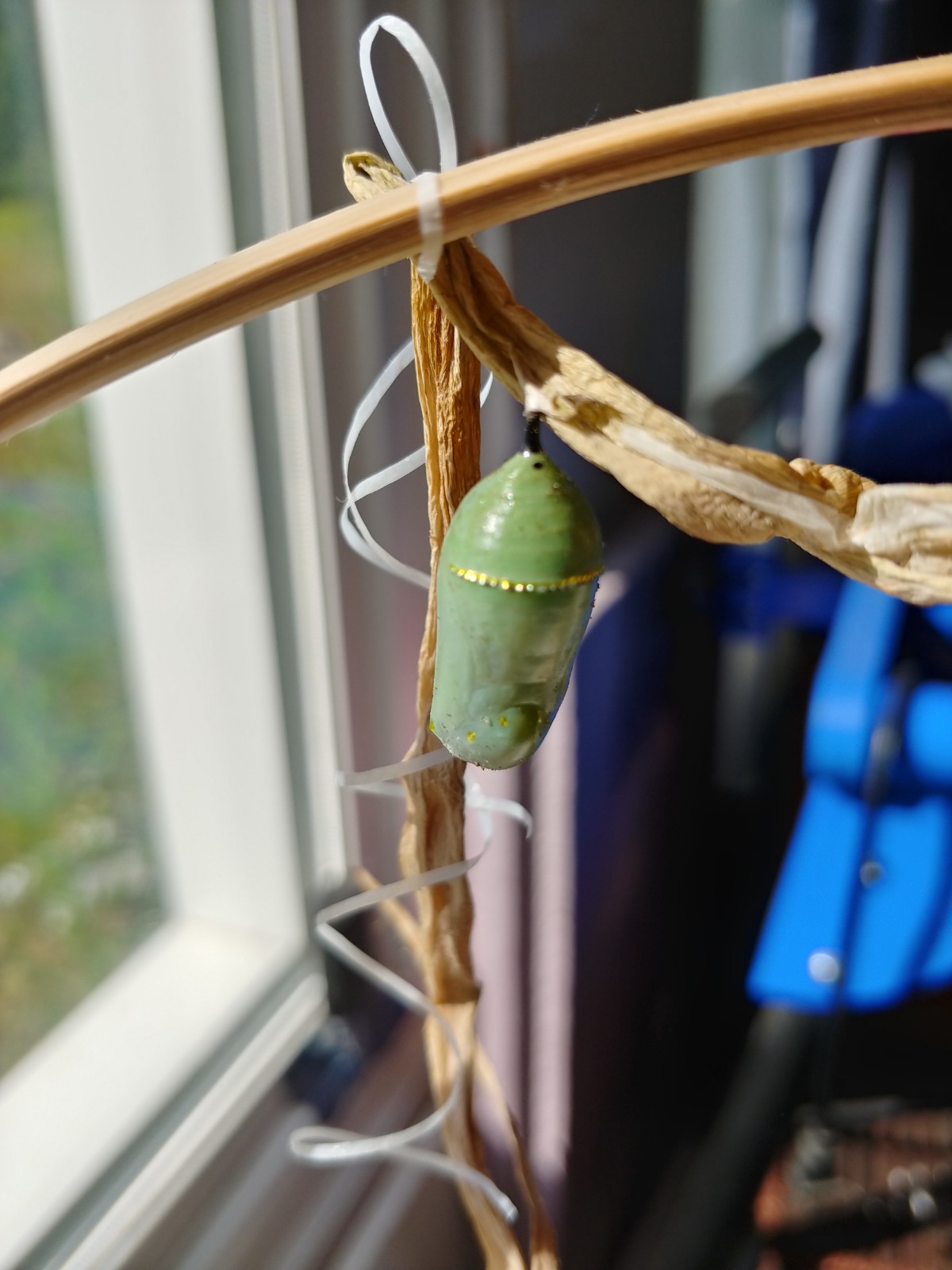 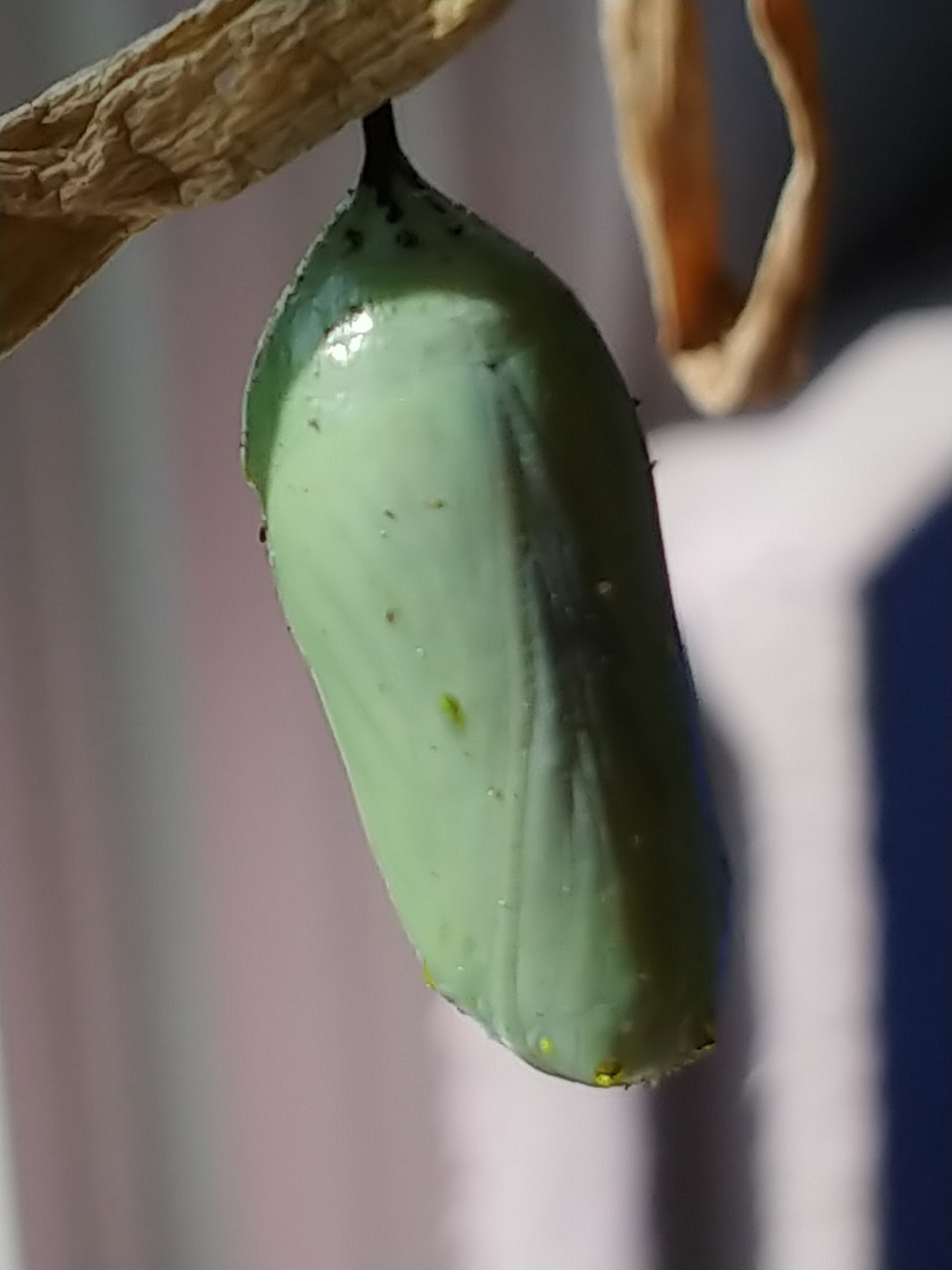 I found the chrysalis on August 19th. Based on my research, the entire transformation from caterpillar into butterfly would take around 10 days, so I thought I had several days to pick the right spot. It had to be fairly sheltered...somewhat dry.....safe from predators....You get the idea....I wanted to make sure that I picked the best spot. I was now responsible for this little Monarch. As fate would have it, I didn't have as much time as I thought. Only two days later, I was up early to get ready for work. I was sitting in my comfy chair, drinking my much needed coffee. I happened to look over at the chrysalis. UH OH! It had changed! 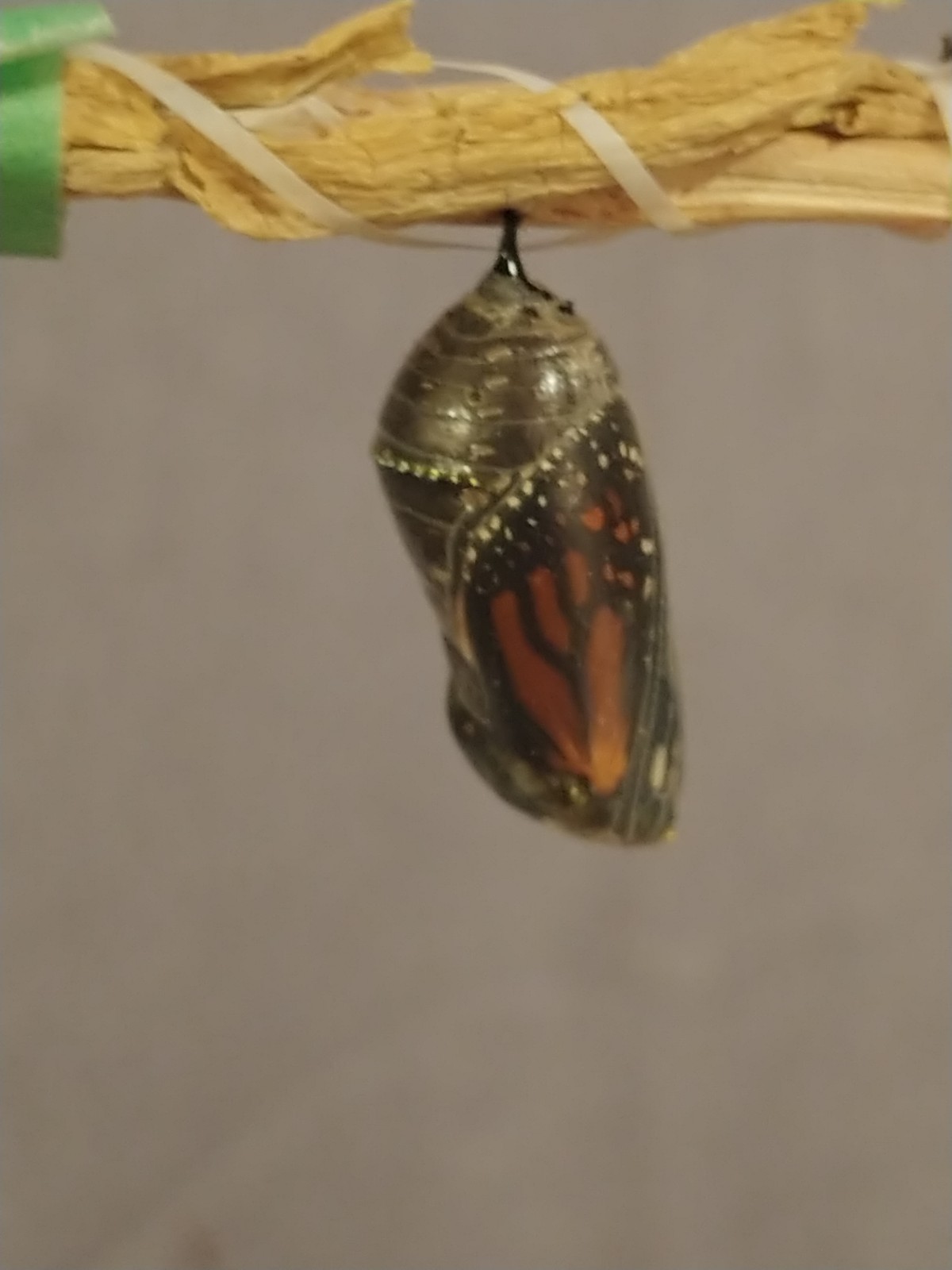 When the chrysalis goes clear, it means that the butterfly is going to emerge very soon. What was I going to do? I hadn't had time to do my research...It was 4:30am in the morning and I had to be at work. There was rain in the forecast....I made the quick decision to place the basket in one of my sheds....There was no time to attach the chrysalis to anything else....I adjusted the dental floss to ensure that the emerging butterfly would have enough clearance on all sides to dry and unfold its wings. I propped the door open with a gas can and wished the chrysalis the best, heading off into the dark to work. When I returned several hours later....I went to the shed right away. What had happened? Can you guess? 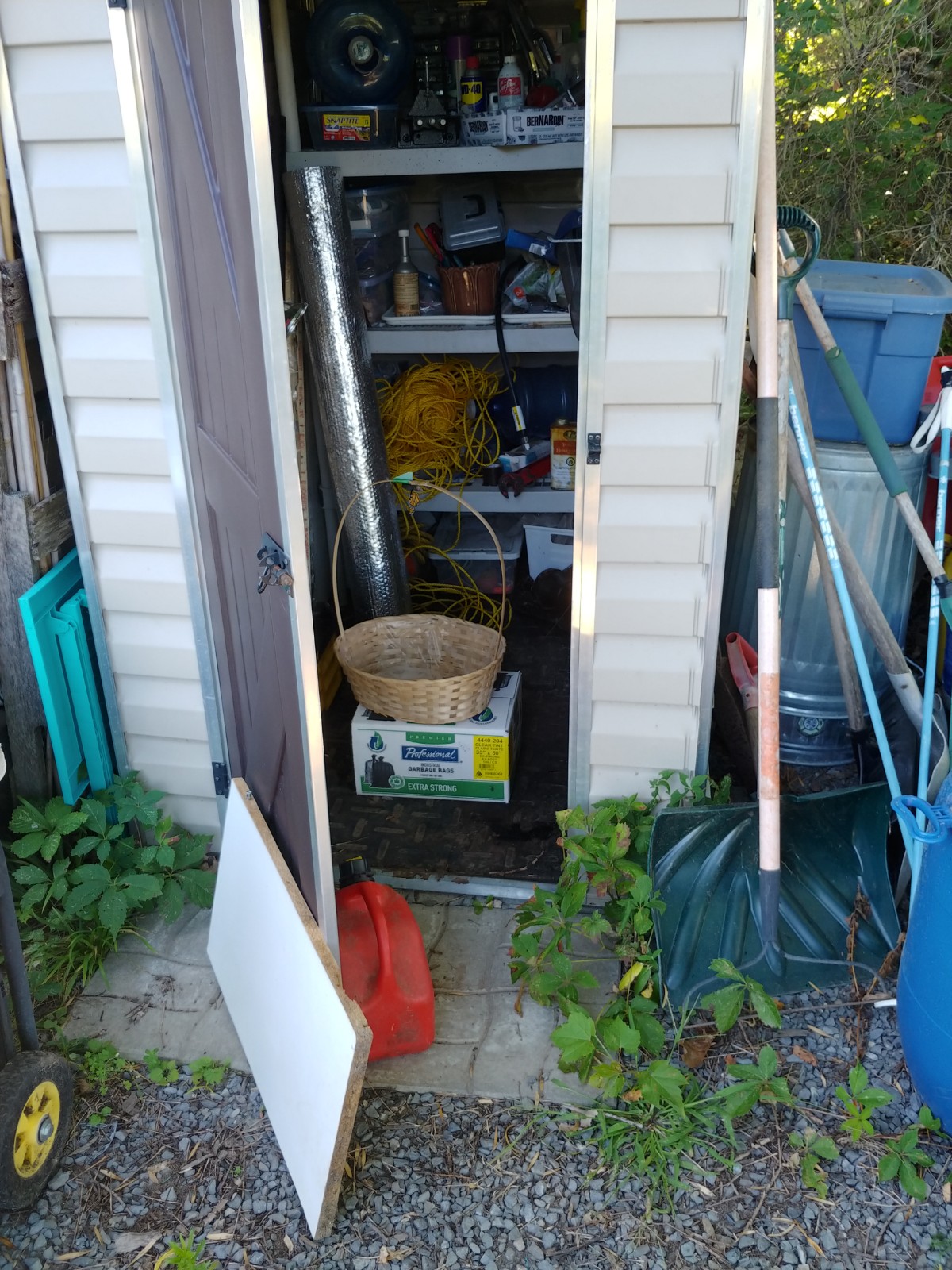 It's a bit hard to see from this distance. However, I was more concerned that I not pressure or frighten the butterfly. Here is a closeup of it sitting on the empty chrysalis and the basket handle. I was so happy that my spontaneous plan had been successful. You can see in this photo that its wings are still not completely unfolded. It still has some work to do. Based on the thickness of the black bands on its wings, this is a female. 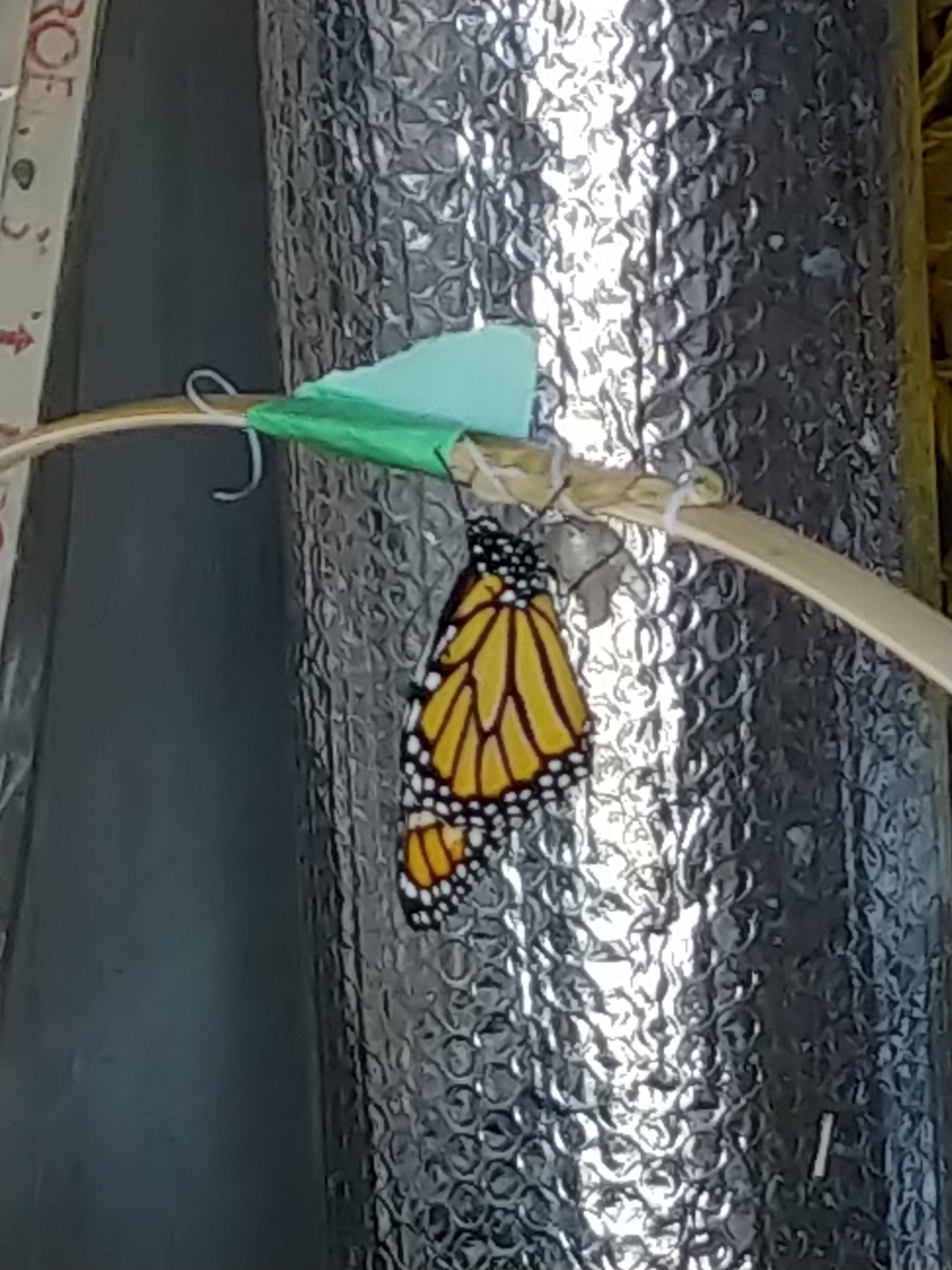 I went inside to have my second breakfast and take a rest after work. When I came out not too long afterwards, I was delighted to see that the butterfly was nowhere to be seen. It had flown! I took a photo of the empty chrysalis. Here it is. 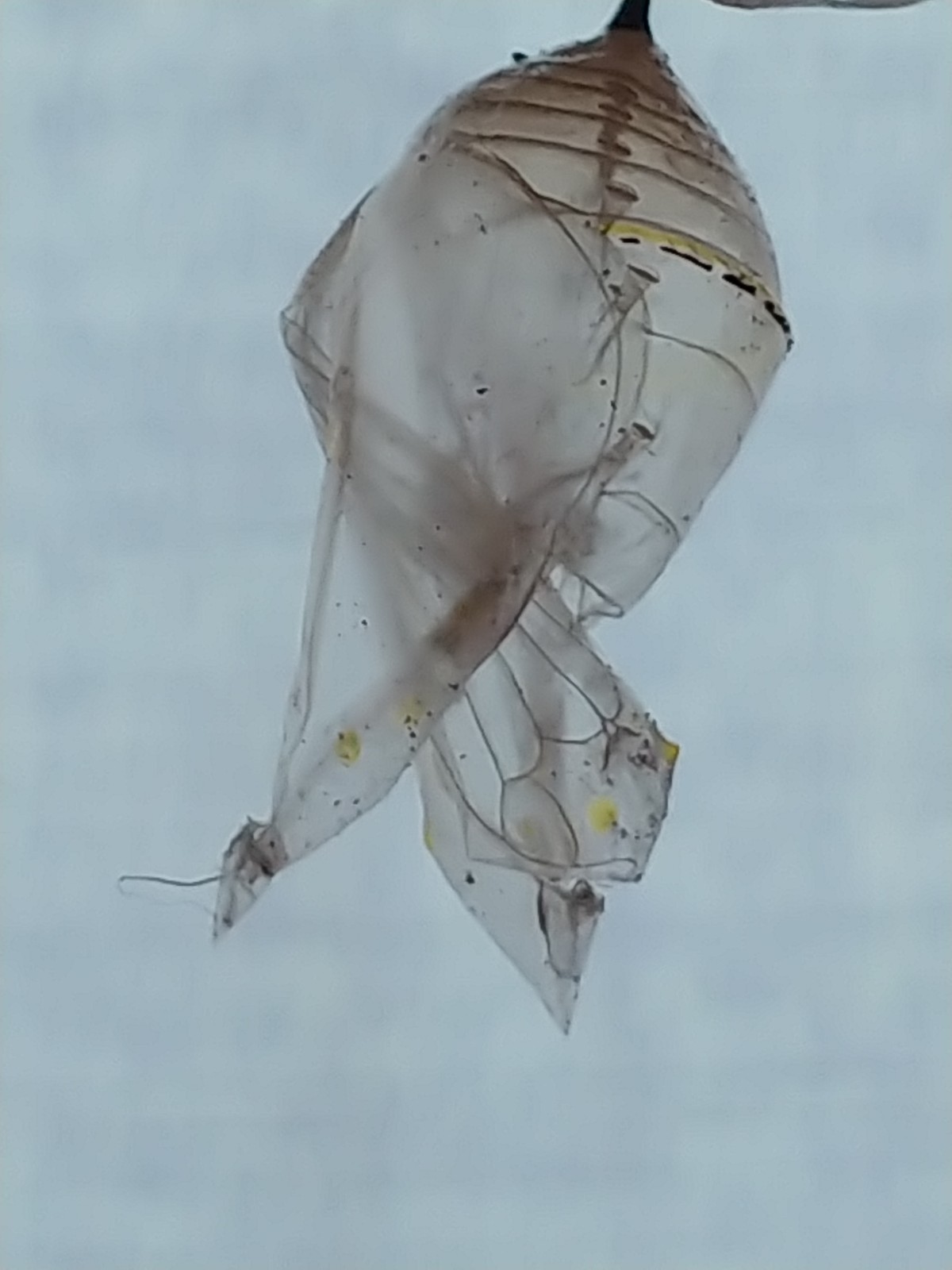 I found it interesting that you can really see the outlines of the wings on it now. The gold spots that had originally caught my eye in the sand were still there, too. Only a couple of days later, I saw a Monarch butterfly on a New England Aster. I could tell it was a female. Could it be my new friend? Have a look at this photo. What do you think? 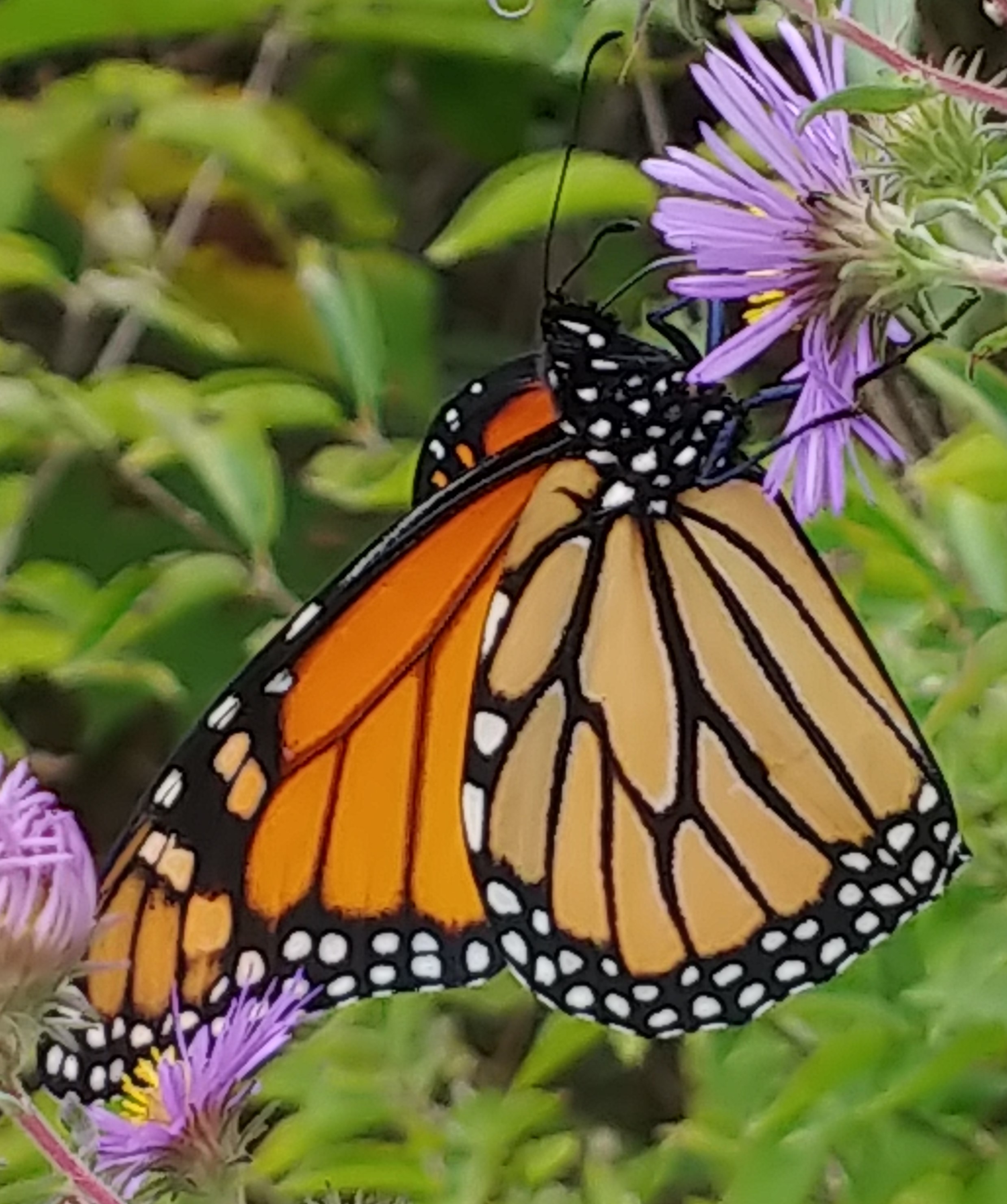 To be honest, I'm really not sure that it's her, but I love the idea that she, or her offspring, could be around Half-Acre Homestead for many generations to come, much longer than I will be. I sincerely hope that the Monarchs will be strong enough as a species to outlive me.

When I was working on this blog post, I had many ideas for the title. Would it be The "Dramatic" Rescue of a Monarch Butterfly? or maybe The "Exciting" Rescue? Hmmmm.

In the end, I chose the title you saw today, The Magical Rescue of a Monarch Butterfly. Yes, I enjoyed helping the Monarch, but I felt the true magic was in the transformation itself. How did this little caterpillar know to hang upside down on the onion leaf? How did it know how to shed its skin? To make the gold spots that would allow it to still breathe? How could it remake itself from that green pod I had found on the ground into an entirely different creature...that can fly?

This is the magic of nature that I find so inspiring and so healing. It is not only in the transformation of the butterfly, but in many other aspects of nature. When I witness these things, I feel closer to God, the creator. I realize that you may use a different name for God or have quite a different idea, or perhaps you don't believe in God, but you feel a closeness to the magic of nature.

I feel awe for these magical happenings all around us. I want to do everything I can to help our beautiful planet and the creatures on it be as healthy as possible. This is why this story is so dear to my heart: I had a chance to play a little role in having Half-Acre Homestead be the Monarch Butterfly Sanctuary that I had hoped it would be.

I hope that you have opportunities to enjoy the magic of nature yourself this fall. No matter where you are, the magic of nature is right there with you. Just take a deep breath.....that oxygen that you just breathed in is now on its way to your bloodstream through your lungs....your heart is beating all on its own without any conscious thought from you. Your body contains more than thirty TRILLION cells, all doing their own job without your supervision. Written out, thirty trillion looks like this: 30,000,000,000,000! By the way, in addition to your own 30 trillion cells, there are likely another 30 to 40 trillion separate microorganisms (bacteria, fungi, viruses) in your body, living with you.

You are alive! You are a magical part of nature yourself.

I wish you a very happy Thanksgiving and harvest, wherever you are!

Be the first to get Half-Acre Homestead news and updates!

Join our community mailing list to receive the latest news and updates from the homestead. Subscribers will get first notice about my upcoming free online course about self-sufficiency!

Your confidentiality will be maintained at all times. Your information will never be shared or sold.